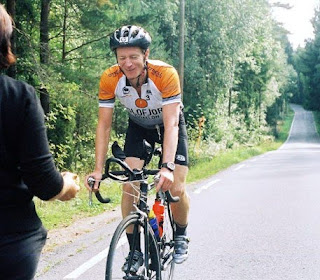 It was not my intention to do this. But in the middle of the week, I got this unbearable urge to do it. After all, we were going to Fredrikstad anyway, to support them. My body was surprisingly fine after last weekends crew race. Just like normal of the days after doing an ironman, I was high and had limited contact between my body and brain. I just had to do it.
It was great to meet the others at early Saturday morning. All the other 9 made their ironman debut. Some of them were not what you would normally consider as fit for doing an ironman. But they all had the urge to do it, even if this was covered by nerves before the swim start. It was early atumn and rather heavy fog.

I could not get rid of Bent during the swim. He was like a lovesick whale. It is strange how 10 people can appear as a pretty huge triathlon swim pack. I was just a bit more than normal tired during the swim. At T1, we were all together. There were really no sense or urgency there. People were just happy to have survived the swim.
Starting on the bike leg, I forgot everything about my plan of going slowly. Fredrik must have infected me with his kamikaze-sickness. I was hunting Steinar that was in the lead and I biked as fast as I could. After a couple of hours, I was only 2 minutes behind. I was going to get him. Not to win, but just to get in front of him for a moment. It is not clear to me how this made sense.

I had found a race fuel food that worked perfectly well this summer. I learned it from Rune Høydahl that won HP Norseman this year. Bread, olive oil, smoked salmon and scrambled egg. The only problem with the food was that Hege could not find me. She had been working as crew and then she had been driving around the bike leg to find me. After 3 hours she did. Then I was more hungry than polite. I did not really hunt for Steinar anymore.
The bike leg had a totalt ascent of 1,100 meters . It is difficult to find a flat circuit in Norway . 180 km’s at the bike can be very lonely when you do 30 km laps with only 10 competitors..

At the run I felt strong. From my navel and up. My legs didn’t appreciate my decision to run. I taped my left leg in T2, but that was not at all successful. I missed my daddy, who had such a success with the tape last weekend. (My messed up ankle was operated a couple of months later and I was able to run properly shortly after).

I gave up after 18 km’s and started a long night’s walk toward the finish in Anne Sofie and Bent’s garden. The good thing about being slow was that Hege could walk with me. That was super nice. After 32 km she even gave me a hamburger.

The idea of having transition zone and finish line in the garden at the farm was great. It was a beautiful place, filled with people cheering and barbequing. They thought we were doing great, no matter how slow we were. And the finisher t-shirt was fantastic!
Lagt inn av Hårek kl. 14:29 Ingen kommentarer: 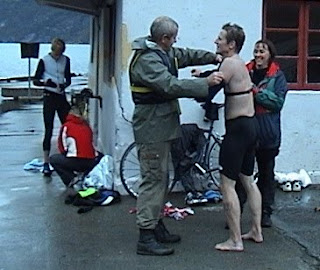 After an extraordinary cold and wet Norwegian summer, we had no hope for pleasant conditions under the crew race in the last weekend of August. We got what we deserved, Bjarne Boge from Eidfjord, Fredrik Mandt (HP Norseman handyman) and me.
It was very wet and windy, and the darkness was complete. The water was measured at "below 14 degrees Celsius". We jumped off the small boat at 4.40 am. Swimming in the darkness was cool for us, but not for the people in the boats, as they could not see us. The waves didn’t make it easier.
Bjarne will spend the winter learning to swim. He gave up the swimming after 45 minutes. His lungs don’t appreciate cold water.
Fredrik is my niece’s boyfriend. I would loose my honour in the family with another defeat of him. My plan was to beat Fredrik by about 20 minutes on the swim. Things went ok in the start. The cold water didn't worry me because I knew it would be worse for Fredrik, as he would stay in the water longer than me. After a while, I seemed to loose my direction. The wetsuit was borrowed from a friend of mine and it didn’t fit me. The cold water circulated freely. The swim never seemed to end. 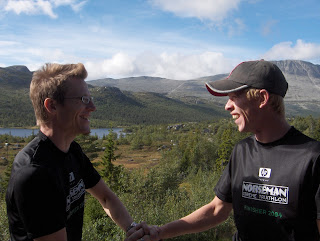 I arrived in 1,52 and I was 40 minutes slower than last year. Fredrik was almost ready to leave on the bike. I was totally helpless, rather confused and extremely cold. My caring wife kicked me on the bike towards the mountains. She was not worried, as DNF is not an option to her.
You don’t stop a man from Eidfjord very easily, so Bjarne decided to use the day on a duathlon, same distance except the swim.

Fredrik has an excellent athletic potential, but he doesn’t connect his brain to the rest of his body. So, as usual, he pushed it to the max up the first mountain. He got me with 40 minutes on the first 40 km’s. I was 1,10 behind my schedule from last year. The race was kind of done. I only concentrated on eating and drinking. Half way through the bike leg, at Geilo, I got the message that I kept the same speed as Fredrik.

The bike leg gave us very strong headwind and heavy rain most of the way. It was not very pleasant and it was obvious that this would become a long day. My wife Hege pushed me to eat and drink a lot all the time. It was a bit much, but she can be rather cruel. So I ate.

At the transition zone in Austbygde, my father was ready to tape my left ankle completely stiff, as I have not been able to run since May. Thanks go out to my mother, who let daddy tape her ankle every day the last week in order to learn the technique.

I left Austbygde 50 minutes after Fredrik. I don’t know how it happened, but I was actually able to run. Not fast, but I could run. My ankle was kind of ok and I felt kind of strong. After 90 minutes I got the message that Fredrik was partly walking and I was only 30 minutes behind. I took the start number out of my pocket for the first time this day. I had been too ashamed of my poor speed, but now things started to look like a race. Then I was 20, 15, 10 and 7 minutes behind when we reached the mountain in Rjukan. The report was that Fredrik was looking very ugly. Unfortunately someone then informed him that I was closely behind him.

Up the mountain I attacked and Fredrik pushed. 10 minutes, then 15, then 8 again. I was partly running, but I could never catch him. Bastard. He got to the mountain check point, after 37 km , 15 minutes before me and I was lost. Fredrik’s guide and support up the mountain was my brother in law. He has spent his life in the mountains. My guide and support was my friend Vidar. He is good at so many things, but he smokes heavily and he got both his knees operated this spring. Of course I had to carry his things, wait for him when he hyperventilated and find the route myself. I am totally lost in that terrible mountain. It was completely dark now, cold and a very strong wind. It was a long march up to the cabin, but rather funny if you have a strange sense of humor.

No surprise that Bjarne and Fredrik was waiting for us at the top. Fredrik was annoyingly happy with his own performance. His 16 hours 39 was far from impressive, but he was there 45 minutes before me. After one hour at the cabin we did the 2 hours walk down the mountain. There is no lift for the crew race.

The best part of the race race was the opportunity to share the experience with my family. And I got my beautiful black t-shirt. Next year I am going to beat Fredrik so badly.
Lagt inn av Hårek kl. 14:27 Ingen kommentarer: