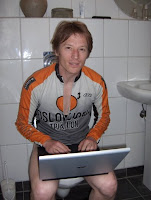 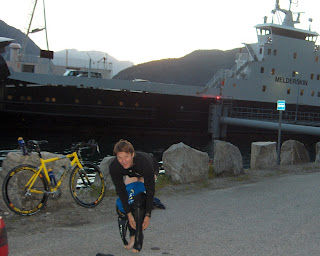 I decided to wear my black t-shirt from 2004 when going to Stavern and the ”Seigmann Triatlon”. Wearing the t-shirt made me very happy that day. At the Langangen-bridge, I took a very important decision. I must have it, I just must have it. Black t-shirt. 2005 was a year without meaning. I ate porridge for Christmas.

So Hege and I went to Eidfjord at Friday July 14. We just had to. We love that trip over the mountains. It is summer, it is neoprene, it is mountains and it is black t-shirt. This is life.

The weather was perfect and we got to Eidfjord at its most beautiful. We have spent enough rainy days there. The only little issue was that Statkraft had stolen the warm water again. So I had to swim at Brimnes, like at the main race in 2005. The sea kept 15 degrees there, not really cold, but I am a chicken. I tested neoprene socks and cap for the first time.

Start at 0442 at Brimnes. Only Hege and me. I swam a 200 meters roundtrip and Hege could watch me all the time. I kept thinking of the porpoise (nise) that the local Bjarne Boge had met the same place at swim training a few days before. The 3,8 km took me 1 hour and 20. Water is an overestimated substance.

It was an extra 10 km’s into Eidfjord. There was Bjarne waiting for me at his bike. He never says no to the opportunity for a long ride with company. The Måbudalen was fantastic. At Dyranut we had 8 degrees C at half past eight in the morning. It was so beautiful. No wind at all. We saw the glacier Hardangerjøkulen all the way. The Hardangervidda was just fantastic. We kept an excellent speed at the bike. Life was perfect and I was perhaps a bit too eager.

At Geilo, my friend Tim Bennet was waiting at his bike. Like Bjarne, he is always ready for a long ride. He was at Geilo training and recovering after his last ironman. He is better at training than recovering I think. After 130 km’s, Bjarne turned back towards Eidfjord. And I ran out of power. Totally. Up the last mountain, Imingfjell, I had to go zigzag and use my arms as extra engines. It did not go fast at all.

I left T2 at Austbygde after 9 hours and 55 minutes. 8 hours and 15 at the bike ride of 190 km’s. Not really fast, but faster than I was in shape to do. And faster than I had planned. I had a plan. A good plan. To follow the cut-off times of the main race and move as cheap as possible. The plan was smart. But I didn’t follow it.

I planned to race conservatively because my shape was very modest. It had been a difficult year. I had been healthy and able to train properly only the last 3 months. And properly meant like 5 hours a week. But I was fit and fine to move slowly. I thought.

I like running. After hours at the bike, it is a new way of moving. And new opportunities. I was fine for about 15 km’s. I kept about 6 min’s pr km and I got back my belief in a beautiful day. Then I went out of power again. Hege gave me service more and more often, food, drink and cooled me down. It was about 27 degrees C. I can usually handle much warmer weather, but not today. I ran very slowly towards the Zombie Hill at 25 km’s in just under 3 hours. When you have first reached the hill, the legs will do the rest on their own. I thought.
Not this time. I was tired. I spent more than 2 hours on the 7 km’s up to the health check point at the Gaustablikk crossing. I was there almost an hour before the cut off. But I failed the health check. I was zombie. Hege was not willing to discuss with me. I took a good break, to wait for a miracle. I ate and drank.

The weak part of the plan of the day, was that I should make it without support up the mountain. And down. In the dark and with a headlight. A bit on the border, but ok if I was very fit. I was not.

So I started on the long and bitter walk towards Gaustablikk Høyfjellshotell and the white t-shirt. 10 km’s to go, included extra turns to make the full distance. Hege walked with me the last 6 km’s. No reason to run. No energy either. I finished at 16 hours 56. 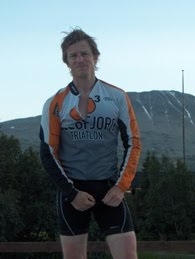 What did I learn from this? Food is difficult. I made another experiment with fluid food. It has been unsuccessful before. It didn’t take me fit and fine to the finish line this time either. Perhaps I can’t handle the warm weather as good as I believe myself. Perhaps my training has just been insufficient. And I learnt that you really have to work hard to get to that top of the mountain. Next time I get there, I will be very proud of myself. And, the white t-shirt is not too bad. It looks good and I worked hard to earn it. But next time, I am going for black.

It was same presidia as every year after the race. Staying inside my sleeping bag with lots of clothes on, freezing like crazy and Hege feeding me like a chicken. Never bring a male friend as support. It will ruin your image.

No iron distance race has ever been run with fewer competitors than this... In fact it was a bit lonely. I am not sure I will do this alone again.
Lagt inn av Hårek kl. 14:32 Ingen kommentarer: