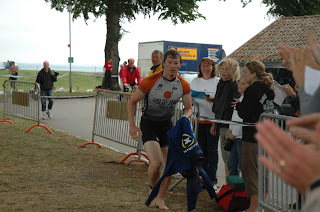 Kalmar 2005 was great! It is not really such a long time since I did my first triathlon there in 1999. But it feels like a long time ago. At that time, I had not yet met another triathlete. This time we were a large Norwegian group. Lots of orange people from Oslofjord Triatlon, lots of great people and great fun!

2005 was the year for testing of alternative food. Liquid food. I had mixed together a mixture that I was totally sure would be a great success. Everything went fine until 130 km on the bike. It was my first trip longer than 100 km this year, but I was fine. Until I was completely empty. I couldn’t keep the speed of old grandmothers on the last round. I was standing in the bike, just to get back to T2.

Back in T2, I was starving. I sent William to McDonalds. Forget about my special diet. I kicked Trond K’s butt in T2, not to be funny, but because I was angry. I stayed in T2 and ate bananas and wheat buns. And I kept on like this for the first food stations on the run. After a while, things started to work again. William followed me on his bike and we had a nice time. I passed Guy after 30 km’s. He had gone zombie again. It is such a pleasure to be with him when he is like that. Adeleid and Hanne did their first ironman and were smiling and appeared to be perfectly happy all day. They are very annoying girls.

I finished at 11 hours 27 and my new personal best. I did the swim at my normal 1,17, the bike at 5,50, and the run at 4,13. I should be happy, but I was so close to do the perfect race and prove for my self my max potential. I messed it up at food. It was my 7th ironman and I am still dreaming of the perfect day.

Kalmar is great. It is the perfect place to make your debut or to hunt for a new personal best. It is friendly but not very exciting. I have been there every third year since 1999. Hege, Rebekka and William loves to go there. So, I’ll be back.
Lagt inn av Hårek kl. 14:40 Ingen kommentarer: 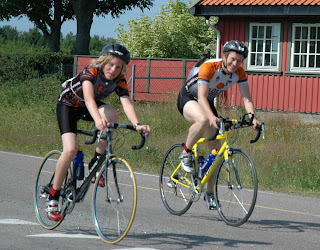 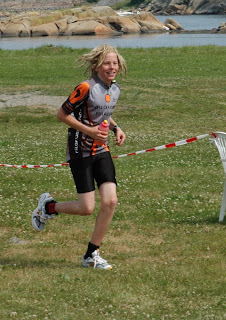